Timelapse from Boston captured what appears to be a crush on Logan of a National Park Service camera atop the Bunker Hill Monument in Charlestown.

Across the harbor at Coolidge Corner in Brookline, Josh Borrow was in the middle of it. Here is the view towards the Pru:

The National Weather Service radar at 4:38 p.m. was quite ominous: 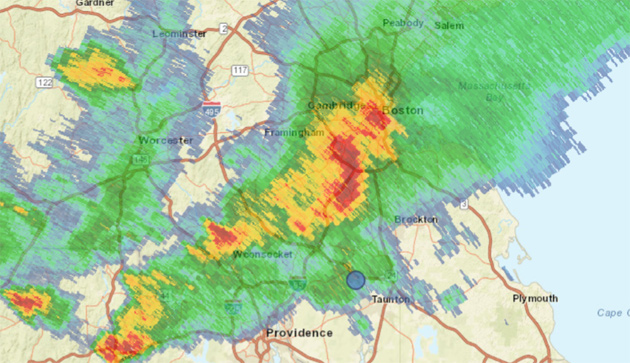 Two motorists had to get out of their cars when the water reached around a meter high under the train tracks that cross Quincy Street in Dorchester.

At least two motorists also got stuck in deep water on Spring Street at the entrance to Star Market, an area prone to flooding simply when someone drops a cup of coffee:

River Street in Readville was partially blocked when a tree fell.

The power has been cut in the area of ​​Norfolk Avenue and Shirley Street in Roxbury. The power was also cut at Fields Corner in Dorchester. Eversource estimated that 4,980 Boston homes and businesses lost power due to lightning, mostly in Roxbury and Dorchester.

The Boston Inflatable Lock is no longer deflated and blew up to Rt 93 N/B during the storm. @universalhub pic.twitter.com/eLX3PAEcyG

People who thought they were about to land in Boston instead found themselves staring out the window at the PVD terminals.